What are the Different Types of Trombones?

There are ten different types of trombones: straight tenor, alto, bass, alto, cimbasso, soprano, piccolo, valve, soprano, and marching. Whether you wish to join your college band or you just want to jazz it up at the orchestra, the trombone is the perfect instrument to do so. It is relatively simple, which explains why it is the most popular of all the brass instruments. It is the perfect instrument between a Tuba and a Trumpet.

A musician can use a wide variety of methods to control the tone of the music emanating from the trombone. These control methods including lip vibrations, mouth movements, the amount of blown air, and a telescoping slide. Some trombones feature only a couple of valves, while a few may include 5 or more valves.

This grants much more control at your fingertips. You can manipulate the slide in or out to change the notes while also using the other factors at your disposal.

There are more than 10 different types of trombones available in the market. As a beginner, you might be confused about which one to start with. Or if you’re already a player, you might want to experiment with the other types. But before you do so it is important that you learn about these different types and what they are used for.

Each type has its own unique tonal qualities that may attract you. Some can play high pitch sounds while some can play low bass clef music. Others may allow you to play the full range of the specific music.

Although there are many types of trombones, the seven most popular types include:

The Tenor trombone is perhaps the most popular type of trombone as it is the simplest of them all. You play the trombone by pulling the slide in and out. When you pull the slide out, the tuning changes from Bb to F. Mostly, you can use it to play bass clef notes. In some cases, you may be able to play treble clef music as well.

This type of trombone includes no tubing inside the main section. You can add a trigger attachment to play notes that other trombones cannot play. In this case, it is called a trigger-type trombone. This attachment allows you to play in the key of F or even lower if you want to. You can easily change notes by manipulating the trigger without even moving the slide.

Because it is so simple, it is quite popular with beginners who need an inexpensive and easy instrument to play.

All kinds of music.

An alto trombone is set to the key of Eb or F, making it higher pitch than the Tenor trombone. Often, it may include a valve attachment that extends its range to a Bb or D. Most musicians use the Alto in bands or orchestras to play the higher parts of the composition. Their slides are a little shorter than the other types.

The sad part is that the Alto isn’t as common today. A part of the reason lies in the fact that the Tenor trombone can almost always cover the entire range of the Alto. Consequently, you might not need it if you already have the Tenor.

Similar to how the Alto plays the higher notes, the Bass trombone plays the lower ones. It is pitched to the key of Bb. With the addition of two valves, you can easily extend the range of the bass trombone to D or F. It consists of a larger bell than a tenor trombone.

Most bands and orchestras do not use more than one of these if the song doesn’t include a specific part for the instrument. On the other hand, due to the extended range, you can easily perform solos with this instrument.

The Cimbasso Trombone is generally set to the key of Eb, C or F. What’s unique about the Cimbasso is that it has 3 to 6 valves. You’ll find the range to be similar to that of the Tuba or the Contrabass. The valves allow you to produce unique and low tones. In fact, famous composers specifically developed it because they could not find the appropriate trombone to use for their music.

If you’re looking to play the lowest of sounds, nothing but the Contrabass will do. It is pitched to C or Bb. It produces sounds an octave lower than the tenor trombone. The unique part about it is that it includes double slides which allow for greater control. Also, it might include valves but that’s not always the case.

A Soprano trombone doesn’t find many uses in the modern world today. It owes its unpopularity to the fact that it is hard to play. Not to mention that other instruments can easily play the parts designed for a Soprano.

It has a very small slide and is often referred to as a slide trumpet. In fact, its mouthpiece and sound resemble more to that of a trumpet than a trombone. You can play it to the key of Bb but it tends to be an octave higher than the Tenor trombone.

Trombones come in various shapes and sizes with numerous attachments and valves. It may be difficult to choose which one to play. There are a number of cheap trombones that are of good quality that you can look into if you are on a budget.

No votes so far! Be the first to rate this post. 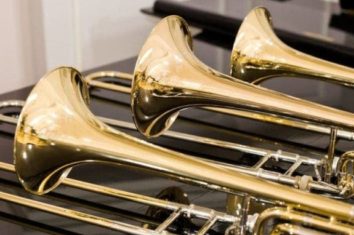 What are the Different Types of Trombones

Are Trumpets Hard to Learn?

What are the Advantages of a Dynamic Microphone

10 Best MIDI Keyboards for Beginners in 2021