What are the Advantages of a Dynamic Microphone?

Microphones have been used by professionals for more than a century. They remain one of the most crucial parts of production and recording. All in all, they simply capture the sound and convert it into an electronic signal.

This electronic signal is then transmitted to a speaker or recorded for later use. Although there are many types of microphones available, the simplest one is the dynamic microphone. They are quite popular amongst vocalists due to their rugged build and their ability to withstand high-pressure sound levels. You may choose the dynamic microphone due to its various advantages over other types.

What Are Dynamic Microphones?

Dynamic microphones work on the principle of electromagnetic induction for sound transmission. They use a coil and a diaphragm to convert sound waves into electronic signals. The word ‘dynamic’ indicates that the device converts the movement of the diaphragm into electricity.

A coil of wire is attached to the diaphragm. When sound waves hit the diaphragm, it moves back and forth, moving the coil of wire along with it. The coil moves in the magnetic field of a permanent magnet, which in turn, induces an electric current in the coil.

The amount of current produced within the coil depends on the amount of movement of the diaphragm. When this varying current passes through an output device such as a speaker, it recreates the sound.

This simple and durable design brings many advantages to the table. Since the dynamic microphone produces the signal in a direct manner, it may not need any external source of power. At the same time, it isn’t quite responsive to changes in the acoustic signal as the coil weighs down the diaphragm.

These microphones work well with the solid beat of the drum as well as an electric guitar. It may not, however, capture high-frequency sounds such as the cymbal very well. That being said, there are various versions that can work with higher frequencies and may even need an external source of power.

The output impedance generally ranges around 200 Ohms, however, versions of up to 50k are available. When it comes to the frequency response, 40-15,000 Hz is the norm.

Some of the major advantages of dynamic microphones are:

They Are Durable and Rugged

The general perception of dynamic microphones is that they are more rugged and durable. The robust dynamic microphone includes durable and heavier components that can withstand a tremendous amount of abuse. Also, it is resistant to drops, which is why live performers prefer them over the other types.

It does not deteriorate over the years, either. In fact, you can have 5 dynamic mics in various states of ruin without them sounding any different. At the same time, they are heavier, which means they tend to hit the floor harder. All in all, they can outlast any other type of microphone.

They Do Not Need a Power Supply

They Pick Up Less Noise

With other types of mics, you may hear excessive noise in the background. This is especially true for amateur podcasters who often record in their rooms where various noises often intrude. Dynamic mics are somewhat less sensitive to noise, so they only pick your vocals without any of the unnecessary background noise.

With condenser mics, you’ll notice that they tend to heavily emphasize the S and T’s of any vocalist. This is where a de-esser comes in, however they may not always work perfectly. A safer bet is to go with a dynamic mic which is not as sensitive to high-frequency notes and doesn’t need a de-esser.

They Are Not Harsh

They cannot capture the high-end frequency material that a condenser mic can. As a result, condenser mics almost always sound too bright and harsh. A dynamic model will not have a similar harshness and will fare far better in scenarios where you want to sound dark and dull.

They Are Less Expensive

Of course, you’ll find various models that are higher quality and thus, more expensive. In general, due to their simple mechanism and purely mechanical construction, they are almost always cheaper than their condenser counterparts.

For instance, the Sony FV100 dynamic mic costs you less than $10, whereas the Nadv SPC-15 (which is a condenser mic) costs you about $40. These are both the cheapest mics in each category. The stark difference is indicative of the simpler design of the dynamic mics.

What about the Disadvantages?

It’s not all rainbows and sunshine with dynamic mics. They are not as sensitive at picking up high-frequency sounds like the other types. At the same time, they do tend to be sensitive to any variations in humidity and temperature. Their sensitivity changes with these conditions. Thus, they are not the most stable mics in terms of sensitivity.

Choosing to play with a dynamic mic has its fair share of advantages as well as a few disadvantages. It is still important that you choose the right microphone for the job with the correct sensitivity level. Otherwise, you can end up having your drums sound too loud or your vocals being too bright.

Dynamic microphones are the ultimate budget option that is bound to last a long time. They are perfect for recording instruments such as drums, electric guitars, and live vocals.

What is the Difference Between Dynamic and Condenser Microphones 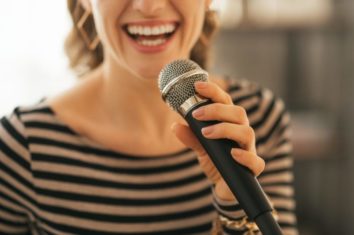 How to Avoid Wireless Microphone Interference

What is the Difference Between Dynamic and Condenser Microphones