Can Electric Guitars Be Played Without An Amp?

Yes, electric guitars can be played without an amp. They will not, however, project as much sound if they’re not plugged in. As any musician might tell you, an amplifier is a crucial part of a setup that involves an electric guitar. It can help to amplify the sound and add an extra ‘oomph’ to it. On the other hand, as a beginner, you might be reluctant to buy both an amplifier and an electric guitar at the same time.

If you’re short on cash, you might buy a guitar first and wait to buy the amp later (though there are a number of quality electric guitars available for under $1000. You can even find some top electric guitars for under $500). But the point is, if you buy both a guitar and amp from brands with questionable quality, you could end up wasting your money. So, learning how to play the electric guitar without an amp may be an option. Either way, just don’t compromise on the quality of your guitar. This will end up saving you money in the long run.

Does an Amplifier Make a Difference?

The first question you need to ask is whether or not you need an amp. Does it really make a difference? We recommend that you plug the guitar in and hear the difference yourself.

The basic anatomy of an amplifier includes a preamp that is responsible for amplifying signals from your guitar. It adds muscle (or gain) to the sound and determines its basic tones. Basically, it adds bulk to the signal but it is not too strong.

The next part of it is a power amp that takes the signal from the preamp and adds more strength to it. This way, if the sound is loud, it can easily rock your speakers without disturbances in the sound.

Next, the signal comes out from the speakers and allows the guitarist to listen to the output signal.

An amplifier not only magnifies the signals from an electric guitar but also shapes and distorts the signal to make it sound better. For instance, you can easily adjust the amp until the sound produces a certain feedback vibration to it. If you keep making further adjustments, the feedback will become more consistent and steadier. You can also play around with settings such as reverb, echo, or distortion.

Playing the instrument now should build up the feedback and amplify the tone tenfold. If you choose to remove it, you’ll notice how quiet the electric guitar is on its own.

It might sound great, but will it be as steady as with an amp? You’re not going to get the same sound or strength without one.

For example, you can choose to play the signals through stereo speakers or even a PA speaker to help rediscover that similar output. Still, your speakers might not be able to replicate the same tones as your amp.

While you can play the electric guitar through other means of sound amplification, it won’t be as easy or as nice as an amp specifically made for this purpose.

How to Play Electric Guitars Without an Amp

As we already mentioned, there are a couple of alternatives you can use instead of an amplifier.

A Home Stereo or a Boom Box

The first alternative is a rather simple one. It is perhaps the best alternative as you might not even need an amp later if you can figure out how to work it. It further makes for an extremely inexpensive option especially if you already have a home stereo. Apart from the stereo, you may require a connector which costs merely $5 and is easily available from any electronics store.

The connector may be metal or plastic. The more suitable connector should have a female jack of about 0.25 inches while the other end should be a male RCA. Also, ensure that the female end of the jack is mono as you need to connect it to the guitar.

Another aspect you need to consider is the volume.  Make sure that the stereo volume is at its minimum before connecting with the guitar. This way there’s no surges or charges that can harm your equipment.

As soon as you connect the equipment together, turn the volume on the guitar about halfway up. Next, gradually start increasing the volume until you hear the magnification of sound. You can further modify the tone and the strength by using the controls on the stereo.

If you’re using a boom box, you can follow the same method. The only difference is that you need to use a connector with a 1/8-inch male jack.

You can easily enjoy the full acoustic experience of your guitar through something as simple as headphones. You can either modify the ones you already have or buy specific guitar headphones that are cheaper than an amp.

These include a battery-powered unit that allows you to modify and amplify the signals from your electric guitar. These usually include a belt clip so you can hang them on to your belt while you play the guitar. All you need to do is plug the electric guitar into the unit the same way you would plug it into an amp.

Before turning the unit on, remember to turn the volume down. Otherwise, it can cause electrical surges which can harm your equipment (and your ears!). Then, turn it on and gradually increase the volume. All you need to do now is use the controls on your guitar to modify the volume and the tone.

Some units also include separate controls that allow you to modify the signal similar to an amplifier. This might include EQ, reverb, distortion, and a large number of advanced effects. Furthermore, they mostly come with pre-arranged sets or sounds to make it easier for you to play around.

If you do not want to invest in a headphone box, you can try buying a computer software program. This program allows you to modify the sound, but you would need to plug the guitar into the computer.

While an amplifier may be an important part of your setup, you can choose to skip it for the above cheaper alternatives. They might not provide you with the same modification options, but they can still closely replicate an amp.

If you haven’t already chosen a guitar, you can always consider an acoustic guitar as a less expensive alternative. You can find a number of great acoustic guitars available for under $300 so it will be friendly on a smaller budget.

All in all though, the easy answer is yes: you can play your electric guitar without an amplifier. Ready to make your choice? What will it be? 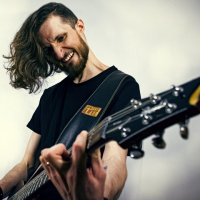 Matt is a professional guitar player in a rock band and a private instructor on the side. He actively writes for MSpot sharing his insightful knowledge of the guitar industry.

mspot.com is a participant in the Amazon Services LLC Associates Program, an affiliate advertising program designed to provide a means for sites to earn advertising fees by advertising and linking to Amazon.com. As an Amazon Associate, we earn from qualifying purchases.