The eighties are back, and with a vengeance as keytars have returned to the rock music scene. But these aren’t your father’s keytars – they are a new breed of stage-ready keyboards with updated features and freedom from cables and keyboard stands.

Keytars have returned to give keyboardists the ultimate in freedom – no more having to be glued to a keyboard stand or even wires and cables. Instead, the keytar, slung around their neck, enables the savvy keyboardist to roam the stage freely rather than hiding in the shadows.

In this article, we’ll go over the four best keytars available today along with criteria to consider when buying a cater. Then, we’ll do a review of each keytar and tell you which one is our very favorite freedom machine. 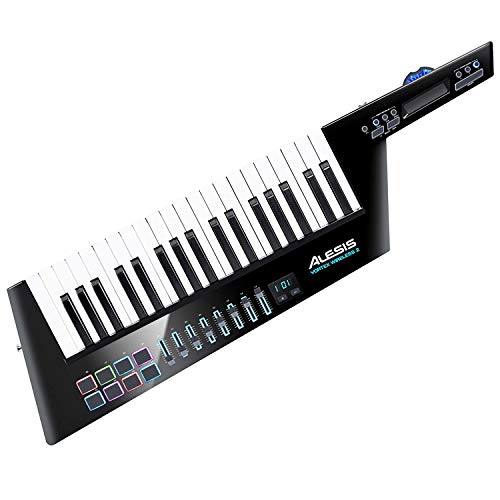 The Alesis Vortex Wireless 2 Keytar is the ultimate in musical freedom because it can be used completely wirelessly. Unfortunately, this 37-key keytar is a simple midi controller, so it can’t produce sound by itself – it needs to be connected to other keyboards or a digital audio workstation to make sound. Most DAWs have a wide variety of sounds and patches to choose from, though, so you won’t be stuck with just a few sounds.

However, the Vortex gives you the ultimate freedom to walk around the stage, which makes it worthwhile. It also has 8 RGB backlit pads and eight sliders, all of which are programmable to EQ and effects. In addition, the Alesis Vortex has a pitch bending wheel and volume slider built into the neck. You’ll also find a touch strip, sustain, and octave buttons for additional control over your tunes.

The synth-action keys also have after-touch for additional effects. You use a USB Bluetooth dongle for connectivity to your MIDI devices. 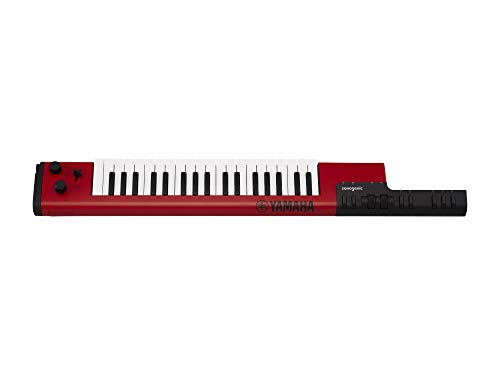 The Yamaha Sonogenic Keytar is reasonably priced for those with a smaller budget. This keytar has a lot of interesting features you may enjoy, such as built-in speakers that make it easy to play and listen to. Jam mode is a unique feature to this keytar. You play the rhythm while the keytar makes sure you play the right notes to your favorite tunes – you can even use music from iTunes. The Sonogenic Keytar has all kinds of options for connectivity, including iOS functions, USB, Bluetooth, and MIDI. You can connect to iTunes or your favorite digital audio workstation for additional sounds, recording, and features.

The Roland AX Edge Keytar is, without a doubt, the rockstar’s keytar. It has an edgy, throwback look that fits perfectly into live performances, and it is simply chock full of interesting features. First of all, it has great ergonomics, so you’ll have an easier time playing long gigs or smashing long practice sessions. It also has over 500 built-in patches to explore and enjoy while you play. If that isn’t enough, though, you can use the USB Bluetooth MIDI to power up software instruments and sound modules on your digital audio workstation to give you even more instruments at your disposal.

Best of all, this keytar has 49 full-size velocity-sensitive keys to give you even more musical nuance to your tunes. In addition, you can adjust all of the sounds with onboard effects such as reverb, chorus, delay, EQ, and the compressor.

Korg originally released this keytar in 1984 and has since redesigned it to be even better. It features 37 velocity-sensitive keys, with an 8-note synthesizer and 200 presets for any type of music. You can easily connect to headphones for private practice or a lineout for performances. It also has USB MIDI to use as a master controller for unlimited additional instruments and effects.

Criteria for Choosing the 4 Best Keytars

The point of a keytar is to have the ability to play like a pianist or keyboardist with the freedom of a guitar. You don’t have to be stuck standing in front of a keyboard stand anymore! And although keytars seem like a mere throwback to the eighties, they’re gaining in popularity due to their freedom of movement, wireless connectivity, and rockstar appeal.

Of course, you may want to consider some different criteria when you’re looking for a new keytar. And whether you like 80s music or modern, you’ll probably love at least one of these keytars on our list. So here’s what we considered when we looked at the best ones.

If a keytar is for freedom, you might want to consider what kind of connections you’ll have when playing it. Some keytars use a wireless USB interface to go, well, totally wireless! Usually, wireless keytars are used as MIDI controls to play through traditional keyboards, workstations, or computers onstage. A wired keytar may have onboard sounds or patches and use a line out to connect to the sound system. While this may slow you down a bit, it is still more freedom than if you were stuck to a keyboard on a keyboard stand.

We prefer completely wireless keytars, but this isn’t an option for everyone.

You may want a keytar that is MIDI-capable. This way, it will have much more functionality as a MIDI controller rather than just as a keyboard. This will give you access to many more sounds, effects, and functions because you can connect to your digital audio workstation, keyboard workstation, or other keyboards. You can program the keytar to use the sounds and effects you want rather than just the ones that come built into the instrument. Then, you’ll be able to assign those sounds to your keytar, just like you would with a MIDI keyboard.

A wireless Bluetooth MIDI connection offers a lot more usability and freedom than a wired MIDI connection, but you can choose what you like the best.

Programmable pads can have many uses, from adding drum tracks, to managing sound effects and instruments. Backlit pads are even easier to see when performing, and velocity-sensitive pads are great for sound effects. Most keytars have at least a few pads, but you can choose one with more or less whatever suits your style and needs.

Digital pianos often have weighted keys with the graded hammer standard to give you the most authentic, realistic acoustic piano feeling when you play. A keytar, however, is worn on a strap over your shoulder. You wouldn’t want the extra weight of weighted keys hanging on you. It would be way too heavy to play.

Instead, look for a keytar with synth-action keys. These keys will have a little bit of resistance created by a spring inside of plastic keys.

Sometimes, keytars have slightly smaller keys in order to save space and weight. If you are coming from a traditional piano background, it might take some getting used to before you can really feel confident on the smaller keys. However, some keytars come equipped with standard piano-sized keys. This may be better for you if you have a lot of piano experience. The keys will feel more natural.

Aftertouch happens when you play a key and then press deep into the keybed. This will activate an effect on the note, such as tremolo or vibrato. Aftertouch is used to add more musical expression to your music. In some cases, aftertouch can be programmed to use the effect of your choice, but often times it is a basic tremolo sound so that you can make your playing sound more like guitar licks.

Most keytars have 37 keys, but there are a few that have a whopping 49. You’ll have to choose which you prefer. While it sounds nice to have the extra octave of keys, it will also make your keytar much longer, which might end up being harder to carry and harder to play.

37 keys is a simple standard that will cover most types of music.

Keyboardists might call them sound banks, but guitarists may call them patches. While some keytars don’t have any onboard sounds and function only as MIDI controllers, we like keytars that also have onboard sound banks. This makes it easier for you to practice and access sounds, especially when you don’t want to drag your digital audio workstation to your next gig.

A keytar strap is important because you need to be able to hold your keytar while you play it, just like a guitar. In addition, the strap needs to offer some level of comfort and fit you well. Otherwise, your keytar won’t sit in the right spot against your body so that you can play it easily.

Keytars were designed to be played much like a guitar. However, you need to choose one that fits your body type. Some keytars will be longer, some will be shorter. The weight distribution of the keytar may vary between brands. You need to find one that is comfortable for you and easy to play.

If the keytar is too long, too heavy, or hangs too low, it could cause you pain and discomfort, which could interrupt your music performance.

Weight is something you need to consider when you purchase a keytar. If you have back or neck problems, weight becomes even more important. A lightweight keytar will be much easier to carry around, play while moving, and give you much more freedom on stage. On the other hand, a heavier keytar may weigh you down so much that it makes it difficult for you to play well.

Newer keytars are much lighter than their early counterparts. This is in part because electronics, in general, have become smaller and lighter. The housing that your keytar is made from will also make a difference. For example, a solid wood keytar will be heavier than one that is made from plastic.

Of course, everyone has a budget they need to stick to. Knowing what you can spend will help you choose a keytar with the most important features for your musical needs.

Our Pick For the Best Keytar

The keytars in our list have a wide variety of price points and accessories, but we love the Alesis Vortex Wireless 2 the best. We love the freedom that comes with being completely wireless. You can move freely around the stage or hop off if you prefer. And because it’s a wireless MIDI controller, although you’ll need to bring along some kind of audio workstation to produce the sound, you’ll have access to many more sounds than what could be stored directly in the keytar.

The Vortex has 37 velocity-sensitive keys, which is just right for balancing out ergonomics with musicality. It also includes aftertouch for a special musical effect right at your fingertips. Don’t forget the programmable pads and sliders, which can be used for effects, sounds, and even onboard EQ, if you choose.

The Alesis Vortex is also moderately priced. Of course, you will need some additional MIDI instruments, but there are easy-to-find free digital audio workstations that can give you some sounds and effects to get started.

Written By:
Matt Freeman
Matt is a professional guitar player in a rock band and a private instructor on the side. He actively writes for MSpot sharing his insightful knowledge of the guitar industry.

mspot.com is a participant in the Amazon Services LLC Associates Program, an affiliate advertising program designed to provide a means for sites to earn advertising fees by advertising and linking to Amazon.com. As an Amazon Associate, we earn from qualifying purchases.